These are the books that I use and/or refer to in my reading sessions. Each translation has its own strengths and weaknesses, and following the advice of I Ching itself after inquiring it on how to choose and use translations, what I do is to “organize(s) the clan and make distinction between things.” (Hexagram 13)

I call this the “inspiring grandfather” of all Western translations today. Wilhelm, a friend of Jung, translated the I Ching from German (published in 1923) then later by Baynes in English (in 1950). Like most practitioners, I find this work elegant and insightful, as Wilhelm’s energy and passion still vibrates across the page. I Ching: Walking Your Path, Creating Your Future by Hilary Barrett. Arcturus, 2015.

With translated text and simple yet spiritually insightful interpretations, Hilary Barrett, who has been actively running I Ching forums and courses (where I’m part of), provides a no-nonsense I Ching book that helps both beginners and I Ching old-timers. I find her work as one of my best complement for Wilhelm/Baynes. Karcher details beautiful background myths, symbols, stories, and historical account from where most of the I Ching text were based. They help me understand the long-accepted interpretations of the text. It also has detailed discussions on other advance tools in reading a hexagram that I have never found before in other translations. I find this version as one that brings great dignity to the I Ching work. I’ve watched Anthony’s story and I Ching work via YouTube, and I find her deeply contemplative in her approach to the I Ching. I realized it more after getting this book, as I discover its strong  psychological approach on the I Ching: things like how to deal with the ego, and how the Sage within can speak more guidance. I like it for being intensely instructive and methodical, though sometimes it leaves me a little room for mythical imagination, as I’ll have the tendency to rely on the interpretations/commentaries. This big orange book was the first one I bought back in 2007. It’s beautifully illustrated, and sounds to me quite poetic and mystical. I also like it’s explanation of Chinese ideograms, and that alone helped me on oracular readings. Too bad Blok did not translate the text, and instead relied on his explanations of how elements are related.

I Ching: The Tao of Organization by Cheng Yi, translated by Thomas Cleary. Shambhala Publications, 1988.

Based on the work of Cheng Yi, an 11th century I Ching scholar. It focuses on the “inner design” of the organization – how it functions, behaves, and organizes, as well as to manage it in the context of change. It inspired the management strategies of Matsushita Konosuke, founder of electronics company Panasonic. I find this version very useful in organizational decision-making, but might appear quite complicated for personal ones. The I Ching and You by Diana ffarington Hook. Penguin Books Ltd, 1973.

This one is a highly useful guide to the I Ching. I think of this as an extended I Ching introduction (that often goes with most translations), only this one stands alone as an entire book. It details what the I Ching is all about, how to consult it, how to understand the symbols, and how to read and interpret. Only the text sounds too formal that it might be a hard read for readers today.

The Original I Ching Oracle by Rudolf Ritsema and Shantena Augusto Sabbadini. Watkins, 2005.

This thick book is my I Ching bible and dictionary combined. Ritsema, who headed a group of scholars called Eranos, did years of I Ching research that resulted into this book. Ritsema painstakingly broke down the possible range of meanings for each Chinese word. It does not have the usual interpretation many translators provide, and the list of words may appear overwhelming, but to an intuitive like me, Ritsema’s work is like a kaleidoscope of words that I can easily intuit.

I Ching by Kerson Huang and Rosemary Huang. Workman Publishing, 1987.

Huang says his version strips away the Confucian commentaries (Ten Wings) of the I Ching. He wanted it to be bare and straightforward, highlighting in the text its shamanic and Taoist origins. It has few differences with Wilhelm (and other translations based on it), but I use this as a complement to my oracular readings.

I Ching: The Book of Changes by Richard Wilhelm and Cary F. Baynes. Axion Publishing, 2002.

This is an abridged version of the Bollingen Edition, which only includes Carl Jung’s Foreword, Wilhelm’s Preface and his translation of the I Ching without commentaries. This one is my portable and accessible companion.

I Ching (Mentor Series) edited by Raymond Van Over (based on James Legge). New American Library, 1971.

Raymond Van Over explored in detail the work of James Legge, whose translation is less favored in the West than Wilhelm’s. I find Van Over’s editorial insights refreshing, given his background as a fiction writer. He organized the text, named the hexagrams (which Legge didn’t do), and made it very practical for modern readers. 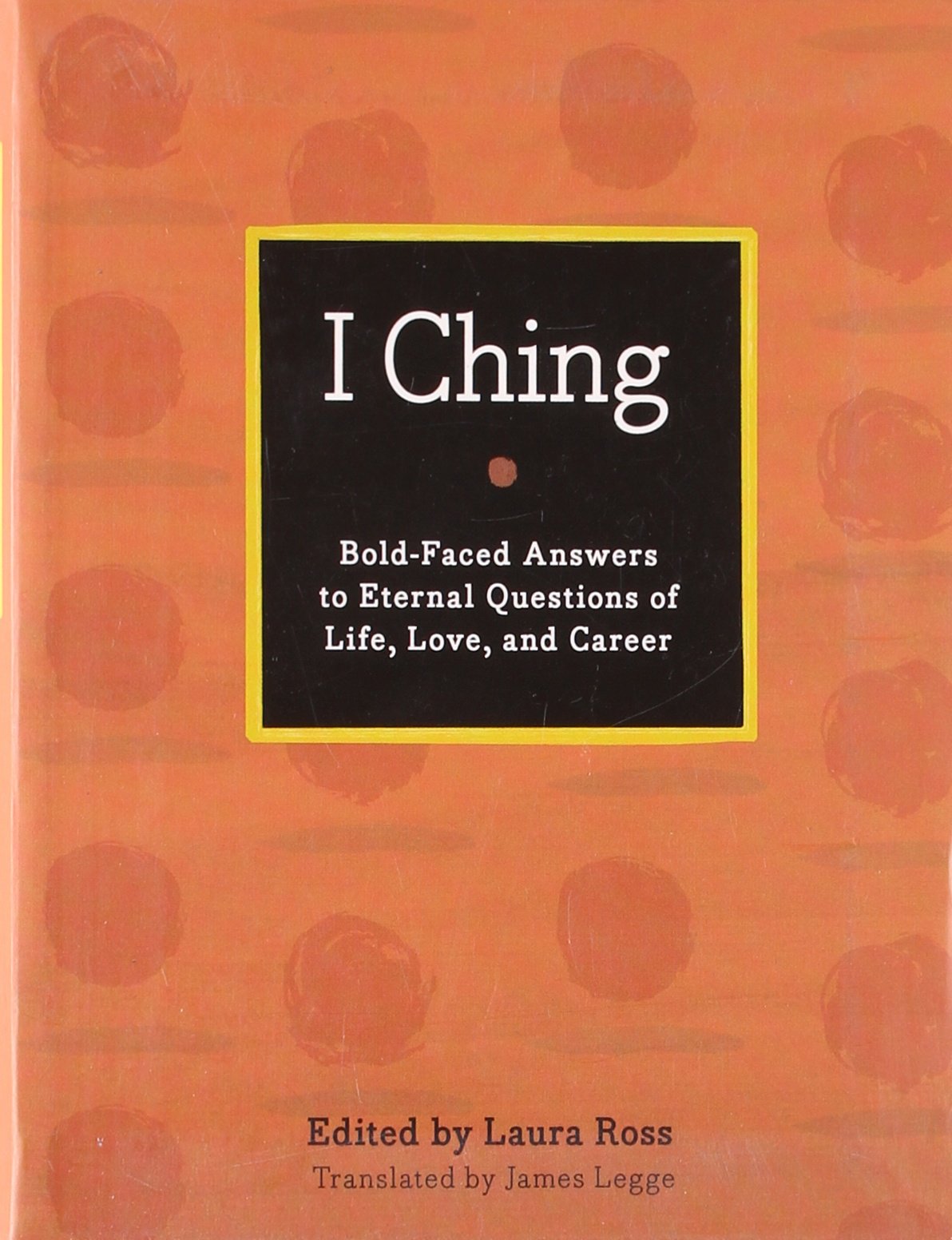 I Ching: Bold-Faced Answers to Eternal Questions of Life, Love and Career edited by Laura Ross (based on James Legge) Sterling, 2011.

Another edition based on James Legge, Laura Ross managed to organized and put headings on each part of Legge’s introduction, and highlighting in orange print those significant lines Legge wrote that may interest the modern reader. Only Ross missed the opportunity of reintroducing Legge’s work in the manner that Van Over did in the 70s.  Still, this one is a useful companion to Van Over’s work.

Wing provided an interesting approach to the I Ching by providing a detailed commentary on each hexagram, combined with classic Chinese paintings that serve as meditation tools. What’s missing though is the translated text for the lines, and to check them at the end pages is quite distracting. 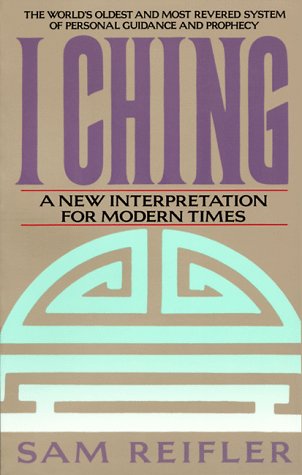 The translations here are poetic and practical, and highly readable compared to most translations using difficult English. I just find Reifler’s introduction too hodge podge, simplistic and new agey, as he forgot to consider the complexity of the I Ching. His use of the Hindu terms is also distracting, but his commentaries are quite sensible and straightforward.

This book is all about the theory and the spirituality behind synchronicity. One section here tackles about the I Ching, and how it is used as a technology to access and encounter synchronicity, as it was theorized by Jung. A good companion read to understand the principle of synchronicity and how Jung was inspired to create the theory based on his long-time practice and fascination of the I Ching.

Eranos: Gateways to Identity by The Eranos Foundation. Spring Journal, 1997.

Eranos is a group of scholars in Switzerland inspired by the work of Carl Jung. These scholars began round table sessions back in 1933, focusing their discussions on humanistic and religious studies. Ritsema was one of the directors back in the 1980s, and they’ve had I Ching sessions during their meetings. This is one of Eranos journal series, with one article about the I Ching by Ritsema and Sabbadini.

I Ching for Beginners by Mark McElroy. Llewelyn Publications, 2005.

McElroy’s book has no exact translations of the Chinese text. Instead, he discusses the perceived meanings of hexagrams and the lines. Helpful for general idea and insights but you’ll miss a great deal from the ancient text, since they are not included here.

Images of Changes: Paintings on the I Ching by Terry Miller (illustrator) and Hale Thatcher (editor). Dutton,1976

This is a collection of meditative illustrations, with poetic commentaries, some are exact translations of the text, but not all. It’s not reliable for the text, but definitely an interesting meditation tool and imagery device (the way most oracle cards work), when words may appear too overwhelming.

I Ching for Everyone by Myles Seabrook. Barnes and Noble,1994

Without translating the text, Seabrook broke down and categorized hexagram insights into 12 convenient channels, saying the ancient text are only analogies. I don’t agree with his approach (since the I Ching, however timeless, still speaks to the seeker), though his work can be a good source of ideas for the pragmatic ones.

I got a copy of Ira Progroff’s book At A Journal’s Workshop, where he discussed his pioneering work on Intensive Journal Writing process. I never knew until now that he once studied with Carl Jung, and even sat down with him to do the I Ching. This is an amazing personal account of a Jungian scholar and his intimate encounter with the I Ching, introduced to him by no less than the Western champion of the I Ching himself.

While most I Ching books are told almost always in a scholar perspective, memoirist Adelen Yen Mah, a Chinese-born, Western-educated writer, gives a fascinating look at Chinese philosophies of her heritage through her own stories, experience and insight. Interestingly, she explores the I Ching in the first chapters, how she learned it from her grandfather. I appreciate how the I Ching becomes a subject of a personal essay.